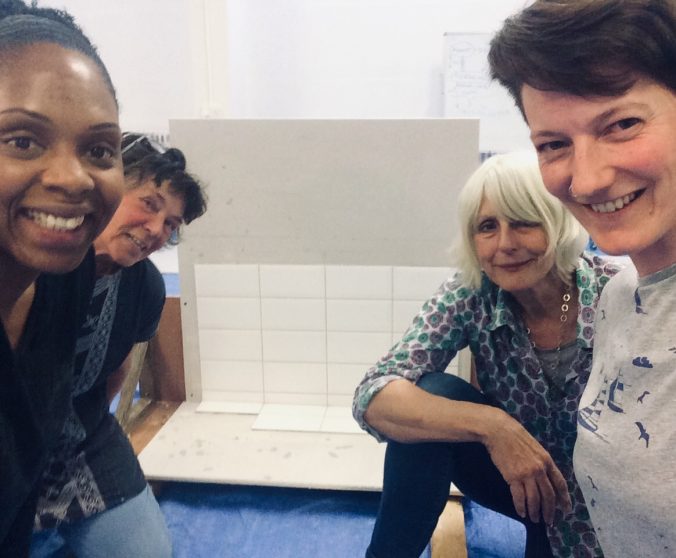 The Team that created the Course

Behind the scene are a team of extremely skilled trades women from around the country. This is a course developed by women for women – by listening to what you really want to learn to be able to fix and maintain your own home.

And there is a bigger picture: our plan is to train other trades women to deliver this course in their own communities with the aim of making this available to as many women as possible all over the country!

Wendy is also known as ‘Female Tiler’ and is a Tiler working in London. She has been tiling for about 7 years now and really enjoys it. She says she got involved because people, especially women, are always amazed when she tells them what she does for a living. They often say they would love to try a little DIY and put their own ‘stamp’ on their home but lack the confidence to to have a go. She wants to help instil some confidence and show that anyone can do it with a little help and guidance. Her Facebook page is at www.facebook.com/FemaleTilerLtd

Lossie has been a Painter and Decorator for the last 15 years, specialising in traditional paints and their applications from limewash and distemper to guilding and woodgraining. She lives in Moretonhampstead, Devon and has worked on National Trust Properties and the Bishop’s Palace in Wells. Having been a teacher in her previous career, Lossie got involved because she wanted to pass on her skills and knowledge to other women. Her website is www.loisraine.co.uk

Claire is a 3D designer and woodworker and has been a director of a small bespoke design and build company based in Stroud, Gloucestershire for the past 22 years. She is Chair of the Board of Trustees for Women and Manual Trades, a charity which has been training and supporting tradeswomen for over 40 years. Claire got involved to support this team with her knowledge and contacts and because she is passionate about giving more women access to the manual trades. Her website is www.schimmerchild.co.uk

Astrid Arnold has been a carpenter for the last 19 years. She lives in Morertonhampstead, Devon and is the Managing Director for TouchWood South West. The idea for the DIY course came partly from her experience in building her own house and also from the requests of women who take part in TouchWood South West’s carpentry courses. Together with Claire she started to create this team to empower women to be able to fix and maintain their own homes, and to empower other Trades Women to teach women in their own communities.

Be empowered, inspired, creative! Practical skills and DIY courses. Let us share our love for craft skills with you. Devon & London, UK

Did some kitchen fitting today (to be continued)!

Just a little reminder this is what we were up to

Missing you all and thinking of you as we should h

Does this dovetailed bread box look familiar to so

Please re-book and reschedule with us! We have bee

It has been a sad but also heartening week. I hav

Laying floor in progress! Making sure there are no

What we are doing about the Coronavirus - Don't pa

Marylou made this beautiful shelf to display her c

Theme by Anders Noren — Up ↑